... the chronological & official report on:

In anticipation of the departure from this area of the undersigned officers and enlisted men of the United States Armed Forces, it is our desire and wish that this letter be brought to the attention of all internees.
The sincere manifestation of good will, appreciation of our work and in particular, the efforts of the Camp Committee and all concerned in ...

AMERICA HAS HEROES
I KNOW THEIR NAMES
by Mary Taylor Previte

We trailed these American heroes everywhere. With the wonder of children, we cut off pieces of their hair for souvenirs. We begged for their signatures, their buttons, their insignia, and pieces of parachute.
We sat on their laps. ...

Sgt. Tad Nagaki didn’t notice the cumbersome parachute and combat equipment strapped to his body as he struggled to climb aboard the B-24 Liberator Bomber in Kunming, China. His thoughts were ...

INTERVIEW: Maj. Stanley Steiger, leader of Duck Mission to parachute into civilian prisoners of war camp near Weihsien, China, for purpose of evacuating internees needing medical assistance, discusses mission details. Describes how camp was found and identified. Lists names of mission participants, roles they played, order in which they jumped from airplane ...

Weihsien liberator TAD NAGAKI is honored, November 2007, by Mayor Dan Kusek of Alliance, Nebraska, with a framed plaque. Created by U.S. Army journalist, Renita Menyhert, the plaque includes Menyhert's article about Tad Nagaki and a 1944 photo of Nagaki and the O.S.S. Nisei unit that ... 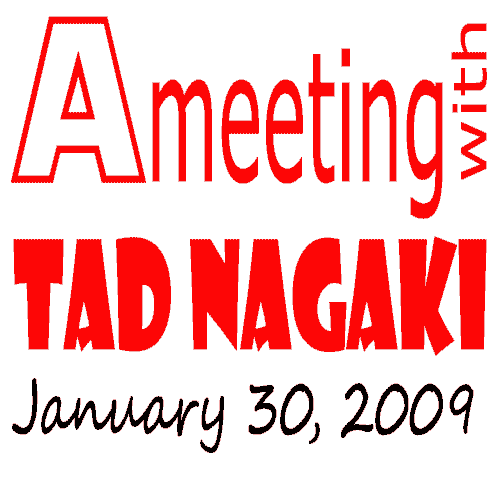 We met Tad Nagaki in person and we both thanked him for rescuing me on August 17th, 1945. He had kindly arranged for us to meet him at Alliance Tractor in Alliance, Nebraska. We called him on our cell phone an hour before our arrival to make sure that all was on schedule. We took him to eat at the Chinese restaurant he selected. The quieter area of the restaurant was taken so ... 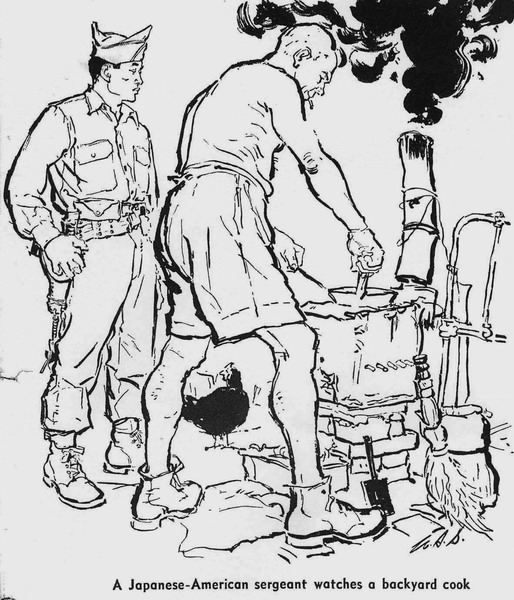 The Saga of Tad Nagaki:

Letters from Weihsien
The story of an American hero and those he helped to free ...

WEIHSIEN LIBERATOR, TAD NAGAKI, 90 years old, is pictured here on his farm in Alliance, Nebraska. Tad actively farms beans, wheat, and corn on his Alliance, Nebraska, farm in America's heartland. Tad is the last living member of the 7-man American rescue team that parachuted from a B-24 bomber on August 17, 1945, to liberate ...

Dear Gay, Coming here to help has been a great pleasure to myself as well as the rest of the members of our group- and now that the parting is so near I dread to see you leave for I have become greatly attached to this camp and hate to see the parting- But may our paths meet again some where some place. Good luck and God be with you.Sincerely Sgt. Tod Nagaki.

Today, we lay an American hero to rest.

The first time I saw Tad Nagaki – oh, who could forget that day?
August 17, 1945.
I was 12 years old, a child prisoner in the Japanese-held Weihsien concentration camp in China.
They were spilling from the belly of a low-flying B-24 bomber — six American heroes, dangling from silk parachutes, dropping into the fields beyond those concentration camp barrier walls ...

Published in the Alliance Times-Herald April 24, 2013

WWII Veteran’s Passing Stirs Memories Of Rescue
BROOMFIELD, Colo. — Tad Nagaki, a resident of Alliance for over 50 years, died April 22 at the home of his grandson in Broomfield. He was 93. Nagaki was the last living member of the World War II, seven-man American rescue team that liberated 1,500 Allied prisoners in the Japanese-held Weihsien concentration Camp in China, Aug. 17, 1945.
“America has lost a true hero,” said retired New Jersey Assemblywoman ...

Sixteen million men and women served in uniform during World War II. Today, 1.2 million are still alive, but hundreds of those vets are dying every day. In honor of Memorial Day, NPR's All Things Considered is remembering some of the veterans who have died this year.
"Tad Nagaki was a gentle, quiet farmer," says Mary Previte, a retired New Jersey legislator and ...

Dick Hamada shared a message he received from Mary Previte, a retired New Jersey legislator, about the recent passing of Tadashi “Tad” Nagaki. As a child, Ms. Previte was imprisoned by the Japanese at Weihsien concentration camp in China. An abbreviated version of Ms. Previte’s eulogy follows.
Said Dick, “That now leaves two still hanging around who participated in the mercy missions: Fumio Kido, who parachuted into Mukden, Manchuria, and me, who parachuted into Peiping, China.”

Tad Nagaki died April 22 at the home of his grandson near Denver. He was 93.
Tad was the last living member of...

WEIHSIEN :
How I Found My World War II Hero – in CHINA
by Mary Taylor Previte

Secret unveiled from an overseas call: 90-year old Chenghan Wang living in Guiyang was on the “Duck Mission” operated by U.S. office of Strategic Services 70 years ago. ...

My Story
by Eddie Wang

In 1943, I was admitted to the department of physics at the Sichuan University in Chengdu. Less than a year later, in 1944, I decided to volunteer and joined the army to defend my country against the invading Japanese army.
I thus gave up my academic studies and was incorporated in the student volunteers' unit of the national army located in Luzhou, south-east of the Sichuan province. In the beginning of 1945, I was selected to go to ... 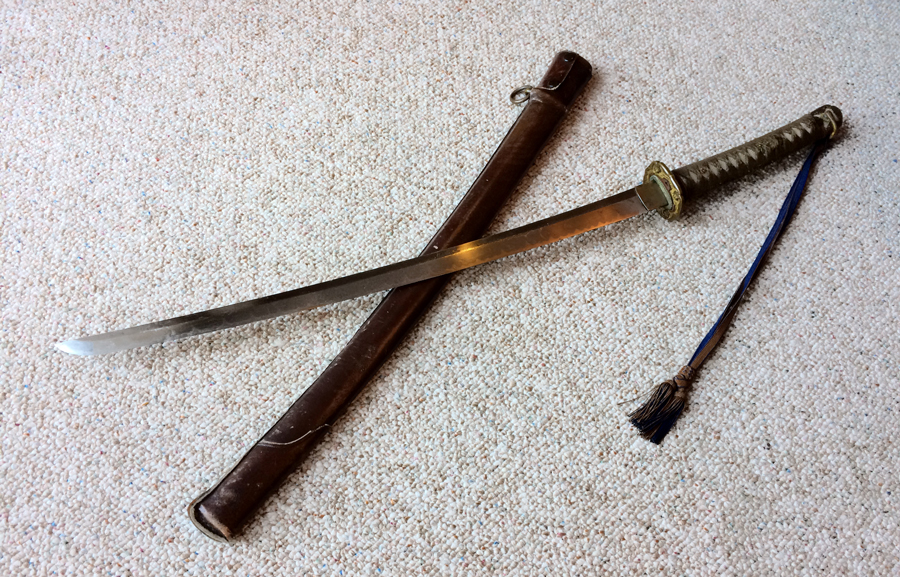 The Commandants' Samurai Swords were surrendered to the victors.

When we were liberated by the Americans on August 17, 1945 and according to Eddie Wang's testimony all the seven members of the Duck Team were in the Commandant's office in the Camp to acknowledge the official surrender of the Weihsien concentration Camp to the Allies.